Since energy demand can be affected by developments outside the energy sector – over which the industry has no control – managements need an active and adaptive review process. There is no room for delusion. The slogan “we will need all the energy we can get” is misguided. The future changes. Economics counts – and social climate objectives matter.

It helps to sort the unknowns into boxes for different time periods.

What we do know of the future is limited to the short term. The oil market always varies with daily news, especially with supply disruptions in Venezuela, Iran, Libya and, most recently, Russia – where we have recently seen the accidental contamination of the Druzhba pipeline send tremors through the market.

And we know, for instance, that in 2020 International Maritime Organisation regulations will come into force to limit the sulphur content of marine fuels to 0.5%, transforming the marine fuels market. High-sulphur fuels in the marine market will be replaced by low-sulphur middle distillates, driving up margins against high-sulphur products and crudes, diverting higher sulphur fuel into the power sector and depressing prices there.

In the medium term – say 5 to 8 years – the inbox gets bigger. Activist protests could disrupt progress on construction of pipelines (even in North America or Europe). Shareholder activists could pressure management of listed companies into policy choices reflecting opposition to global warming and promotion of sustainable development or socially responsible behaviour. In some cases, this extends to nudging customers to live more sustainable lives.

There will be winners and losers here. The winners may scale up incremental investment in developing technologies and open the door to getting more oil from known resources in stable countries. The losers will face write-offs for large-scale projects in new technologies that never quite beat the competition or were based on incorrect assumptions about future demand.

Economic cycles always affect the demand for fuels and their share of energy markets, but the broader trend could vary enormously depending on the response to climate change.

The World Energy Outlook (WEO) 2018 from the International Energy Agency (IEA) lays out three pathways to 2040: Current policies, as they are; new policies – so far announced with varying degrees of commitment – and sustainable policies, which sketch out a “pathway” which by 2040 could fulfil the objective of the “Paris Agreement” (2015) of limiting global warming to 2° or below. The WEO discusses these in a wealth of detail, including the possibilities of further electrification and its importance for the growth of renewables.

In all scenarios international oil trade rebalances so that, thanks to growth in US supplies and falling demand in the US and Europe, the Western Hemisphere has a rough self-sufficiency in oil while the Asian countries look for more oil imports than the Middle East can provide.

There are big problems with trying to lay out the future like this. Our knowledge of future demand is limited. The concept of “peak oil demand” is part of the mystique for climate change policy. Improvements in “energy efficiency” account for almost half the difference between the IEA scenarios which limit global warming to 2C rather than 3C by 2050. Some possibilities, related to battery technology, could be transformational in terms of electrification based on renewables.

A much wider unknown, not easily covered by traditional energy outlooks, is the impact on the consuming economy of the same generic technologies which are transforming the world’s economies: big data analysis, machine learning, automation and artificial intelligence. This is what makes global meetings like the upcoming ADIPEC (one of the world’s largest energy events, in Abu Dhabi) so important: they bring the various ideas of different participants – not just from the world of energy, but also technology and governmental policy – up for discussion and debate.

Current wisdom appears to see such technologies transforming many sectors of demand – not only for other consumer goods and services but also energy consumption. It is misleading to talk about “energy services”. The service to final consumers is heat, light, mobility etc. Energy enters further up the supply chain; there may be many supply options. Because these are new businesses, the technological applications have yet to be developed in dozens of different industries. In effect hardware and software will be substituted for fuel.

For the longer term – say 10 years and more – most of the “unknown unknowns” (Donald Rumsfeld’s words) are likely to come from outside the oil and gas or even energy industries.

The future of financial transactions and markets is somewhere buried in the “unknown unknowns” but is certain to evolve. Giant corporations with strong balance sheets will always have certain advantages. Some may be the successors of today’s energy giants, but longevity is not guaranteed. Giant corporations of today in other sectors already include names that were not known 30 years ago, and several large oil companies no longer exist.

The ever-inventive financial sector, taking advantage of new communications, will play an increasing role in the transformation of the energy and economic systems in which these and new enterprises move.

Looking for climate progress in a turbulent world

In 2019 climate change is shorthand for a worldwide trend: while global warming is continuing, public, political and shareholder support for mitigation policy changes is increasing. The two do not match.

The Paris Agreement is increasingly used as a benchmark slogan for policy. But the agreement commits countries to a process rather than specific targets. The real test is still to come. In 2023 there will be a “global stock take” on the effectiveness of the national plans promoted in 2017-18 (and possibly modified after the climate summit in September 2019). The Katowice climate conference of 2018 agreed, after much argument, that all countries should submit their “Nationally determined contributions” (NDCs) in the same model for all types of countries.

Outstanding issues include how to assess technology transfers, how to avoid double counting in trade for carbon credits and how far carbon offsets can be carried forward. The Green Climate Fund and finance offered to developing countries (currently set at $100 billion from 2020) will be reviewed. The issue of interstate compensation for damage – like claims of individuals against fossil fuel suppliers in the US and other courts – will remain controversial.

The variety of technical, commercial and international political options facing the industry is very large. There are new risks. It is difficult to know what an orderly, coherent and reasonably swift transformation to a new state of affairs could be. Over the next 30 years every part of the energy-related system will be affected not only by developments in climate policy, but by general changes in technologies of consumption across the economy. Expect increasing disorder (by the standards of the old order) and a diffusion of responsibility within a turbulent world. 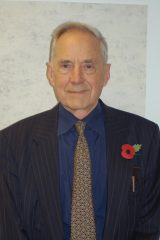 John V. Mitchell is an associate research fellow at Chatham House, research adviser at the Oxford Institute of Energy Studies, and honorary fellow at the Centre for Energy, Petroleum and Mineral Law and Policy at the University of Dundee.

In November 2007 he received a lifetime achievement award for research from King Abdullah of Saudi Arabia at the opening of the third Organization of the Petroleum Exporting Countries (OPEC) summit in Riyadh.

He retired in 1993 from British Petroleum (BP) where his posts included special adviser to the managing directors, regional co-ordinator for BP’s subsidiaries in the Western Hemisphere, and head of BP’s Policy Review Unit.

He has written three books: The New Economy of Oil (2001) and Companies in a World of Conflict (editor, 1998) both published by Chatham House/Earthscan; and The New Geopolitics of Energy (Chatham House, 1996). He was also a contributor to Oil Titans by Valérie Marcel (Brookings/Chatham House, 2006).