Politicians and interest groups are polarising the debate between post COVID-19 economic recovery and decarbonisation. By doing so, they jeopardise Europe’s future. It has to stop.

While Pascal Canfin, prominent Member of the European Parliament, launched a vast call to restore Europe’s economy in line with the EU Green Deal, others are calling to delay or freeze climate ambitions.

European and national leaders have to understand that they can’t have one without the other. Choosing between economic recovery and decarbonisation would be like building a house without durable foundations. It is doomed to collapse.

The excessive polarisation brought by the combination of COVID-19 urgencies and the EU Green Deal is deeply worrying. This will only create more obstacles to recover from this deep economic crisis and achieve decarbonisation. We have to reunite the two.

1. First and foremost, the European Commission has to reflect the expected economic recession in its scenarios to reach a net-carbon economy by 2050.​

Without this assessment, we will struggle to understand what is best for both climate and the economy. The 2030 Climate Target Plan from the European Commission that should be published this year will be a vital test in this regard. This model requires a realistic and updated set of crisis scenarios. Those should provide hints on how to adapt the entire EU Green Deal and how intermediate climate targets (2030 and 2040) will impact existing EU Energy and Climate policies, and the economy as a whole.

To draw the right plans for a long-lasting European edifice post COVID-19, we cannot get the initial measurement wrong.

2. The consequences of the COVID-19 crisis, while still unknown, may well prove to be asymmetrical. It will also be a catalyst for the social agenda that climate ambitions cannot neglect.

COVID-19 is a massive shock that will without doubt influence social behaviours. But this is very likely to diverge across Europe. The loss of household incomes, the volatility of industrial GHG emissions, the lack of liquidity of energy companies, weaker industrial outputs in strategic industries and higher energy poverty rates will not be the same in Spain and Sweden, nor will they be the same in the North and the South of Italy.

The asymmetrical nature of the crisis will require further policy diversity and adequate local cooperation by public authorities, agencies and private companies that won’t necessarily be driven or coordinated by the EU. The role of national political leadership and independent national regulators will be critical to deal with situations locally. ARERA’s Commissioner, Clara Poletti, explains this very clearly in her recent CERRE interview.

Moreover, a stronger social agenda will probably emerge at the national level supporting the most fragile segments of the society (i.e. universal income is now considered in Spain). This agenda will have to coexist with climate ambitions, requiring a fast decarbonisation of the economy.

All sectors (industries, services and public authorities) should recognise this two-layer agenda and get involved in the design and implementation of both sides or they will inevitably collide.

3. This crisis further corrodes citizens’ trust in the European Union and its governance.

The recovery plan needs to put on equal footing the social agenda for recovery and climate aspirations. EU climate trajectories should be carefully calibrated. The very survival of the EU is at stake.

Failing to create a clear roadmap to integrate the social dimension and climate goals in the economic recovery plan will open the door to new forces to reject the European project as a whole.

The Just Transition Mechanism will not be enough and must be revised in light of the COVID-19 crisis. Impacts on distributional effects at regional levels should be at the heart of any recovery plan and policy designed in Brussels.

4. The European Commission’s temporary measures (i.e. Temporary Framework for State Aid) highlight what was missing from the Union’s toolbox to deal with external shocks of any kind (pandemic, environmental, conflict, etc).

A plan for resilient and secure energy infrastructure, the re-integration of European local value chains, the creation of a Single Market for Sustainable Products with premiums and new flagships projects supported by the EU to promote efficient integration of electricity, gas and heating sectors, should be the EU’s priorities to align social, environmental and competitiveness goals.

“Europe must overcome the traditional pattern opposing economic value creation and climate goals. Reconciling both camps through in-depth, fact-based debates and analyses is a necessary condition of success to rebuild a durable future for Europe. 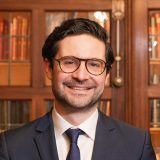 Máximo is Energy Director at the European think tank CERRE (Centre on Regulation in Europe).