Negative electricity prices have become an increasingly frequent occurrence on the power exchanges that allow them. However, there are still many power exchanges, both within and outside of the EU, that do not allow negative prices.  Simona Benedettini and Carlo Stagnaro of the Italian think tank Istituto Bruno Leoni argue that, with a booming renewable sector and a weak demand outlook, negative prices are an important tool for the market to correctly price electricity. They call on all major power exchanges to adapt their rules accordingly.

To date, in the European Union negative power prices have been allowed in the countries covered by the European Power Exchange (EPEX), i.e. France, Germany, Austria, Switzerland, as well as in Belgium and The Netherlands. Other power exchanges, however, do not allow prices to fall below zero. This is probably because, when market rules were designed, there was no particular reason to do otherwise.

How and why do negative prices arise? A negative price indicates that power generators are willing to pay the consumer to buy energy. This is generally due to a combination of high production from renewable energy sources (RES), which are generally characterized by very low or zero marginal generation costs (the most notable exception being biomass), and low demand. Therefore negative prices generally occur on very sunny and/or windy, low-demand, non-working days, such as Summer Sundays or Christmas.

Moreover, negative prices are more likely to emerge where the power system as a whole is not flexible enough, and hence it is hard (i.e., costly) for it to adapt to changing conditions, either on the demand or on the supply side – or both. As a recent EU Commission Staff Working Document on energy prices and costs suggests, “The frequency of occurrence of negative price episodes rose in the last part of the observed period as the costs of ramping up or down of some conventional plants are significant”.

One can therefore expect negative prices when the following conditions are met:

While the economic crisis and the subsequent reduction in actual and expected electricity demand is the contingent cause of negative prices, their deep rationale is to be found in the penetration of RES. On the day-ahead markets, as well as on intra-day markets, most RES bid at very low or zero prices, reflecting their marginal costs. By doing so they cause the merit-order curve, whereby bids are ordered ascendingly, to shift rightwards. This means that as the marginal generator is one with a less costly technology of generation, the market clearing price decreases. (See e.g. here for an illustration of the merit-order curve,)

The process does not need to stop at zero: if the demand is low enough, and renewable production is high enough, the marginal generator, at least for a limited period of time, may be the renewable plant itself. This renewable generator, which has very low or zero marginal costs, will drive down the market clearing price accordingly. To accommodate this pattern, all EU member states allow for a power price equal to zero on the power exchange.

But it may well be the case that some conventional generator finds it more costly to shut and restart later its plants than to keep producing – although at very low capacity – and pay consumers to buy its energy. This is how negative prices may occur – if and when they are allowed.

What negative prices tell to whom

Negative prices are not just the result of some abstruse algorithm underlying the power exchange and the functioning of the power system. They are also, and more fundamentally, the way in which the market conveys the decentralized information that is distributed among all market participants, and that cannot be centralized in one single brain, as Nobel-prize winner Friederich Hayek would say. That information is translated into two major market signals, which are embodied in negative prices.

In the short run, negative prices show that there is a local condition of oversupply under which electricity is not an economic good which society is willing to pay for, but an economic badfor which consumers should be compensated. Therefore, negative prices create an economic incentive for consumers to shift their consumption patterns so as to capture the opportunity of being paid, instead of paying, to receive energy. This is – or should be – particularly interesting for energy-intensive industries across Europe, which are lamenting how high energy costs are depressing their business.

Moreover, negative prices end up reducing the reward for RES generators, because they take the incentive minus the market price, at least in the countries where RES are subsidized through green certificates or feed-in premium schemes or the like, where the green generator takes both the incentive and the market value of the energy that it produces. Under such circumstances green producers give back to energy consumers at least a portion of the extra money they have been taking because of generous subsidies. At the same time, an implicit subsidy to “inflexible” capacity is removed.

However, in the long run, negative prices talk to energy producers, not to energy consumers. The emergence of negative prices, although strongly conditioned by demand-side constraints, shows that the generating fleet encompasses too much “rigid” capacity (i.e. too much nuclear and coal-fuelled plants) and too little “flexible” capacity (for example CCGTs or turbo-gas power plants); or that grid interconnections are insufficient to properly exploit the spare, flexible capacity available within a market area.

Again, there is no “optimal” generating fleet, but it can be reasonably argued that, with low demand growth and a strong renewables presence, an efficient generating fleet should be able to cost-effectively compensate the imbalances that are inherently linked with intermittent generation. At a time when most EU member states are introducing capacity support schemes to make sure that the generating fleet will evolve in a way which is consistent with the adequacy requirements of the power system, negative prices may serve the same purpose. Of course capacity mechanisms may be still needed, depending on a number of issues that are well beyond the scope of this article.

In addition to the useful functions described above, there are two additional reasons why negative prices should be allowed to do their work. This is because they are also instrumental to achieving two separate goals: they are needed to correctly price priority dispatch and to achieve full market coupling.

Many EU member states award renewable generators with explicit as well as implicit subsidies. The most frequent type of explicit subsidy are by monetary incentives, for example in the form of green certificates or feed-in tariffs. The best example of implicit subsidies is probably priority grid access. (Another example is the partial or total socialization of imbalance costs).

In a world of exclusively positive power prices, priority dispatch is almost a meaningless concept for any practical purpose: as we have argued, most RES tend to have very low or nil marginal generating costs, so they bid at (or close to) zero in the day-ahead market as well as in other market sessions (particularly infra-day markets) and therefore get priority anyway. (In technical terms: they enter the merit order curve from the left side, due to their zero, or quasi zero, marginal cost of production.)

But when negative prices are allowed, then things change. With priority dispatch, renewable generation can still displace conventional generation, but it will be paid a market price which is lower than zero. In other words, the green generator will pay consumers, and by so doing it will give them back some part of the monetary incentive it received.

From the point of view of economic rationality, the RES generator will be willing to accept a negative price up to the point that it equals the difference between the incentive and the generator’s “effective” generating cost. In this case, then, negative prices are a bottom-up correction to over-subsidization. Moreover, negative prices make it possible to attach a price to the value of priority dispatch itself.

There is another reason why zero-price countries should allow negative pricing: because other countries have already done so.

As counter-intuitive as it may seem, the fact that a small group of large countries, accounting for a significant share of European electricity demand, has already started the negative-price revolution does have consequences.

Until a few years ago, European electricity markets tended to be pretty much balkanized. Then, three packages of EU directives came, leading to considerable market convergence, based upon the regulatory convergence. And although there are still many differences among national electricity markets in Europe, as well as in the relative degree of market openness, they are now much more similar to each other than before. As a result, there has been an increase in cross-border trade, which in turn has strengthened the case for regulatory harmonization and market convergence.

Now market coupling in the day-ahead markets is already a reality in North-Western Europe and, with the looming adoption of fully inter-operable ICT systems in European power exchanges, it will soon be an EU-wide reality. In time, this full market coupling – with full physical as well as financial integration – will result in a proper internal market with a single price for electricity in Europe.

For now, short of an EU-wide single price, price convergence is already a reality. Further integration will strengthen the convergence process. And this is where negative pricing becomes relevant: if you have two price-convergent markets, and one has negative prices, while the other does not, then what you can expect to happen is an increase of export from the negative-price country to the zero-price one (during the negative-price hours). This, in turn, further displaces conventional generating capacity in the zero-price country, making the lack of flexibility in that market even more costly.

Negative prices are a reality in Europe. Several countries in the Central-Western region have allowed negative prices on their power exchanges. Many others have not: by virtue of this, they implicitly subsidize both renewable and inflexible conventional generators at the expense of consumers. They also prevent a clear market signal to reach actors on the demand and supply side to make them adjust their behaviour and investments. Moreover, they prevent the priority dispatch for renewable energy from being correctly priced and make it more difficult to integrate the booming renewable energy capacity in their countries.

As the EU Commission’s DG Energy states in its most recent Quarterly Report on European Electricity Markets, “Frequent occurrences of negative prices in many European markets signal the need for better integration of renewables into the power grid”: a problem that is going to become only more pressing as EU-wide market coupling gains momentum.

“When my information changes, I alter my conclusions”, said John Maynard Keynes. It is high time for EU member states that do not allow negative prices to change their rules in order to fully capture the missing information these prices provide.

Dr Benedettini is a researcher in electricity market regulation and has been a consultant in competition and antitrust policies. Dr Stagnaro is Senior Fellow at Istituto Bruno Leoni. Disclaimer: the opinions expressed in this paper are those of the authors alone and do not necessarily reflect those of any organization with which they may work or cooperate.

About Simona Benedettini and Carlo Stagnaro 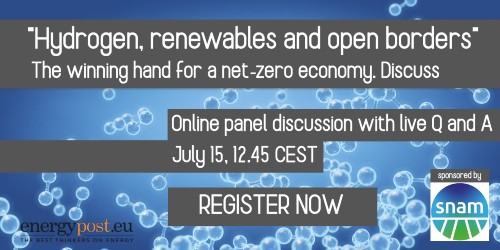