Award-winning director Mariëtte Faber’s documentary “The man who wanted to change the world” has, in her words, come to the end of the line. After countless screenings and a decent clutch of awards, she has decided to make it available for all to see. Whilst climate visionary Peter Westerveld’s work, a key aspect of the film, was not directly related to energy, it was about reversing the momentum of dangerous climate patterns. The techniques explained in the film are a ray of hope for communities in parts of Africa devastated by drought and desertification.

Westerveld’s personal quest, abruptly curtailed when he died before the film was finished, was fraught with challenges. How he persevered is inspirational and subtly captured by Faber. The result is a portrait of a complex individual who managed to get things done against the odds. Energy Post is delighted to bring you the film.

Can someone, an individual, in this day and age change the world? Peter Westerveld has no doubt he can.

In the nineties, Westerveld witnessed the advancing desert in Eastern Africa. Thereafter, he dedicates himself more and more to his ‘land art’, creating solutions for the ongoing erosion and desertification of the landscape.

In the film Peter Westerveld is working on his magnum opus, the ‘Hydrologic Corridor’ in Kenya. With large scale contour-trenching – digging trenches with bulldozers along contours – in strategically chosen locations he aims to stop erosion and make surplus rainwater go subsurface again (water harvesting). In turn, this sets in motion the large-scale automatic rehabilitation of natural processes.

According to Peter, his techniques will result in atmospheric cooling, a more even distribution of rainstorms and eventually, restoration of the ecosystem. This reinforcement of hydrologic corridors could be repeated to reduce the Sahara to smaller proportions. Ultimately, he says, this will lead to worldwide pacification of climate patterns.

The film depicts the fine line between madness and genius in a world where a great idea can easily be held up by the powers that be. Nevertheless, Peter Westerveld’s ideas are continuing to inspire people. 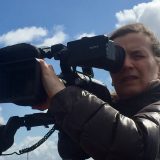