Energy independence is now at the top of the EU’s agenda. Almost all Europe’s biomass is already locally produced, contributing around 60% of the EU’s renewable energy. Marine Perrio at IEECP makes the case for promoting biomass prosumer projects. She points at regions dependent on biomass that have reported stable energy prices in the midst of the drastic increases in gas, oil and coal prices. Biomass uses organic feedstock from agriculture, agroindustry, forestry and municipal waste to generate energy. It is a by-product, so no forests need be harvested, only residues used, says Perrio. As a next step for biomass, she describes the EU-funded BECoop project which aims to unlock the market potential of community bioenergy and renewable energy prosumers. It involves cooperation between users, logistic chain actors and local authorities, with all becoming active market players. Perrio points at case studies in Italy. Tackling energy price shocks and energy poverty with tax breaks and financial support for consumers cannot be a long term solution. Instead, creating energy communities using biomass should be part of a future renewable energy mix that ensures energy security and stable prices, says Perrio.

*** REGISTER NOW: “Unlocking the potential of bioenergy”, our online panel discussion on Thursday 17th March at 12.30CET. Representing two of the most challenging areas for decarbonisation – the cement and aviation industries – are Winston Beck, Head of Government Affairs at HeidelbergCement and Laurent Donceel, Senior Policy Director at Airlines for Europe. They will be joined by Thomas Meth, Chief Commercial Officer at Enviva (event sponsor) and Ricardo Gorini at IRENA, whose World Energy Transition Outlook is due out later this month.***

It is a fact – we’ve heard and read it everywhere for the past couple of months – that energy prices have risen all over Europe. We see and feel the consequences everywhere, with a snowball effect on the price of things – raw materials such as wood or paper, transport, equipment costs are rising too, works are postponed, on top of higher energy bills for consumers. Many have tried finding causes and who was to blame for the high energy prices.

A whole range of market, regulatory and natural factors have led to this situation. Among them, weather conditions leading to insufficient wind and solar power production; an unusually cold winter; a shortage of natural gas; a rebound in demand for energy in China, Europe and elsewhere as the world recovers from the COVID-19 pandemic; European gas storage levels at their lowest in at least a decade and a disruption of the production chains due to the pandemic, which increases costs and causes shortages.

Many more reasons could be added to this list, leading to the spike in energy prices and emphasising the role of traditional generation versus alternatives. In the past weeks, rising tensions between the West and Russia over the Russia / Ukraine conflict have led Commissioner for Energy Kadri Simson to confirm the EU is reviewing its contingency plans for disruptions to gas supply – the European Union relies on Russia for around 40% of its gas, and any interruption would exacerbate the price crisis.

The impact on people, on the economy, on the market is striking. Energy poverty, already at its highs during winter, is increasing and most governments across Europe are trying to put a patch on things with different measures applied.

Some solutions have been suggested by the European Commission in a toolbox for action and support, with some already adopted by Member States. Short-term approaches have included temporary reductions of the VAT rates for electricity and gas, a cap on energy prices and deductions for a large category of consumers in Romania, energy cheques in France and more. These measures, even though a first appropriate response and necessary to lower the direct impacts, especially on vulnerable consumers, are not enough and efficient in the long run and we should rather address the issue with a long-term, system-changing approach.

There are plural long-lasting solutions for a structural approach to the situation, most of them have been shared already and should be part of a holistic strategy, using public money in the most efficient way: investing in building renovation, moving towards more energy efficiency, making a tax shift to protect the most vulnerable energy consumers, have an internal energy market for Europe, etc. While householders could be paid to delay electricity use as recently envisaged, we should probably rather incentivise them to join the transition by becoming, themselves, energy producers.

One of the EU Commission’s recommendations was that if we were to tackle the energy price challenge, it would require accelerating progression towards our target goal of 65% renewable electricity by 2030. A recent statement by a senior administration official reinforces this idea: “To ensure Europe is able to make it through the winter and spring, we expect to be prepared to ensure alternative supplies covering a significant majority of the potential shortfall”.

Renewable energy, alongside energy efficiency, should increase, as believed by 88% of Europeans, according to the last EU barometer. Produced locally, this source of energy ensures price stability and energy security, reducing energy dependency on foreign fossil fuels, something worth noting at times of geopolitical tensions.

But one or two renewable sources alone seem insufficient, and a mix could seem a more permanent solution. As in most cases, balance seems like the appropriate approach. One energy source that is still suffering misconceptions is bioenergy, while it can have a key role to play in the current and future energy system, reducing energy dependence on fossil fuels.

Bioenergy is a flexible and trustable solution that can support both citizens and the industry, in a virtuous cycle. Several of the industries impacted by the energy prices increase and listed previously (wood-related, such as the paper and pulp industries) can benefit from bioenergy, for instance by reusing their residues to supply energy to their own processes. The even less known important fact in the situation we face is that biomass is excluded from the global commodities price fluctuations, as it is locally sourced.

Bioenergy for heating, for instance, is quite competitive if used in an efficient manner for heating and can further reduce energy poverty: it can be up to four times cheaper compared with natural gas or electrical heating. It is an available, storable, local, renewable alternative, allowing local economies to thrive.

Bioenergy consists of using organic feedstock from agriculture, agroindustry, forestry and municipal waste to generate energy in various forms: it is therefore a by-product, meaning that no forest is harvested for energy, only residues are used.

On top of reducing energy poverty and dependency, bioenergy also allows (local) job creation, and revenues for the municipalities. In Italy, SEV, a service provider in South Tyrol, recently reminded customers in their annual wishes that their energy prices did not increase in 20 years. 20 years! SEV is a partner in BECoop, a project funded by the European Union, aiming to democratise the use of bioenergy for heating and unlocking the potential of community bioenergy. One should also be reminded that biomass contributes as much as 60% in reaching the EU objectives for climate and energy (Eurostat, 2021).

Another BECoop partner, FIPER – the Italian Federation of Energy Producers from Renewable Sources, confirms that biomass district heating costs have remained stable in this energy crisis, and describes bioenergy as a life buoy when the markets are out of control, especially in mountain areas and methane-free zones.

Investing in energy efficiency and renewable energy sources in a more integrated EU energy market, especially to replace coal in a far-reaching transition in Poland, seems like a go-to idea. Bioenergy Europe estimates, based on a recent Deloitte report, that in the future, the number of citizens and industries relying on bioenergy will increase as further development of this renewable source is required to achieve the EU emissions targets for 2030 and 2050.

Now imagine a world where energy production is owned by local people, where citizens increasingly turn into renewable energy prosumers, reclaiming the power, in all the word’s senses. This is an approach very well summarised by RESCoop.eu’s president, Dirk Vansintjan.

With the right (supportive) policy framework in place both at national and EU level and an increased awareness, these energy community models (also known as energy cooperatives or RESCoops) allow individuals and communities to reclaim and collectivise decarbonised and renewable energy production (wide spreading in the meantime renewable energy technologies) in a cooperation between users, logistic chain actors and local authorities, becoming active market players.

Interest in these models is growing across Europe, both by private and public actors. The EU Commission recognised the need for such approaches: in a recent tweet, EU Commissioner for Energy Kadri Simson wrote that “the European Commission acknowledges the important role that energy communities can play, involving citizens as active participants in the energy transition, increasing competition and reducing costs for consumers.”

We can therefore only hope that this recent growth will continue for (bio)energy communities, and that both citizens and the public sector will join in on the movement towards a more effective, fair, local and democratised energy transition.

Marine Perrio is Senior Communication and Dissemination Manager at IEECP 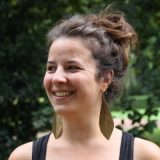 Marine is Senior Communication Officer, leading all communication activities of IEECP and the projects IEECP is coordinating / involved in.

She has 10 years of experience in communications and sustainability and a MSc in management and communications, obtained at the EM Lyon Business and Management School, France. She has strong communication skills on technical subjects and is involved in EU and international projects. Her day-to-day activities include managing websites, newsletters, Social Media accounts, organising conferences and supervising the publication of reports. She has worked / works on several IEE, H2020 and FP7 projects (Enefirst, Turnkey Retrofit, Build Upon², CommONEnergy, ZEBRA2020, Cohereno, iBroad, ExcEED, EUCalc, Build Up…).

Previously, she was Head of Communications at the Buildings Performance Institute Europe (BPIE) where she was, for 7 years, responsible for the definition and implementation of the communication strategies of BPIE and EU projects, Marketing and Communications expert for Intertek RDC, an Environmental Consulting agency in Brussels and Sustainability Manager for Woodstower, a Street Art and Music Festival.