Today, IRENA and the Ammonia Energy Association (AEA) released its “Innovation Outlook Renewable Ammonia” which updates in detail the current state and prospects for green ammonia as an energy carrier. Here, Dolf Gielen, Francisco Boshell and Gabriel Castellanos at IRENA and Kevin Rouwenhorst and Trevor Brown at the AEA summarise the findings. Worldwide ammonia production, though fossil-based, is already at-scale as a feedstock for fertiliser. So this global network will greatly assist its emergence as a renewables-based green source of energy that can help supplant fossil fuels alongside the growing hydrogen economy. But green ammonia will need to be created at scale using significant additions of renewable electricity. Its main applications will be for shipping fuel, power plants, and also as a hydrogen carrier. The authors note that ammonia – or NH3 – is a better, more dense energy carrier than pure H2. As ammonia is easily liquefied, there is 50% more hydrogen in a tank of ammonia than there is in the same tank of liquid hydrogen. The authors point at the full report’s assessment of the technology status and outlook, a comprehensive breakdown of future markets, the need for standards and certification, and more.

On 19 May, the International Renewable Energy Agency (IRENA) and the Ammonia Energy Association (AEA) released its “Innovation Outlook Renewable Ammonia”. Renewable ammonia is a key component of the hydrogen economy. This new analysis from IRENA and AEA provides an up-to-date and detailed overview of renewable ammonia in contrast to conventional ammonia and fossil-based ammonia with carbon mitigation, including the technology status and outlook, and a comprehensive breakdown of future markets for renewable ammonia. It also complements recent analysis from IRENA on the Geopolitics of Green Hydrogen and the opportunities for Green Hydrogen Global Trade.

Ammonia is the second largest hydrogen market after oil refining today and it will remain a key market in the future. Renewable ammonia production is a hydrogen market segment that is progressing rapidly, and innovative ammonia applications may grow this market significantly. Renewable ammonia can reduce natural gas dependency, currently a key concern in Europe. The EU-27 produced around 13.2 Mt ammonia, which equals around 10 BCM natural gas use.

Ammonia is an essential global commodity. Nearly 200 Mt ammonia is produced every year. Fertiliser is the largest ammonia market today. Various types of nitrogen fertiliser exist such as ammonium nitrate and urea.

The implications of the current situation with natural gas prices in Europe are becoming evident, for example, fertiliser producer Yara has announced a curtailment of their urea-ammonia production units in Italy and France, citing high gas prices. Others have followed suit.  In some European countries changes in wholesale prices are reflected almost immediately in retail prices whereas in others it takes up to two years. In this context, renewable ammonia may be cost-competitive relative to fossil-based ammonia far sooner than expected. The techno-economic analysis contained in this new report provides the foundation for understanding the price impact of the transition to renewable ammonia.

Ammonia as an energy carrier

In addition to the fertilisers market, there is increasing interest in ammonia as an energy carrier. This application includes green ammonia as CO2-free fuel for ocean going vessels, as fuel for power plants, or as a hydrogen energy carrier. The ammonia chemical formula is NH3: three hydrogen molecules combined with one nitrogen molecule. As ammonia is easily liquefied, it is more energy dense than hydrogen. In fact, there is 50% more hydrogen in a tank of ammonia than there is in the same tank of liquid hydrogen. Due to the high hydrogen content, the volumetric energy content of ammonia is roughly half that of oil products — the most of any carbon free fuel.

Global ammonia production today accounts for around 2% (8.6 EJ) of total final energy consumption. Today, ammonia is produced almost exclusively from fossil fuels. Most of the ammonia is produced from natural gas, while China uses coal feedstock. China accounts for about a third of world production. A typical gas-based ammonia plant is 60% energy efficient, while coal based plant are less efficient. As a rule of thumb, a modern gas steam methane reforming process requires 28 GJ/t ammonia while a modern coal gasification process requires 42 GJ/t ammonia.

Direct emissions from ammonia production currently amount to 450 Mt CO2. Urea poses special challenges because its production requires ammonia and CO2. This CO2 is released when the urea fertiliser is applied. Therefore, other nitrogen fertilisers do not have this problem and a partial shift away from urea may be needed going forward.

Ammonia prices are volatile. The present ammonia spot price is very high. On the one hand this can be attributed to high gas prices that for example affect ammonia production in Europe; on the other hand, Russian ammonia and fertiliser exports are affected by sanctions. The high ammonia fertiliser prices pose a direct threat to food security, especially in developing countries. It is not clear how long it will take to overcome this scarcity.

A shift to renewable ammonia – produced from green hydrogen that in turn is produced from renewable power – can eliminate the process emissions. Also, this would decouple ammonia production from natural gas pricing.

Today’s cost of renewable ammonia is USD 720/t at locations with good solar and wind resources. This cost is already below today’s ammonia spot price, above 1,000 USD/t and it is expected to halve in the years to come, as the cost of green hydrogen continue to fall in the range between USD 310/t to USD 610/t by 2050.

Significant experience exists with ammonia shipping: world trade in ammonia amounted to USD 6.5 bln in 2020 (around 15 Mt or 10% of total production), with Saudi Arabia, Russia and Trinidad and Tobago as major exporters and India, South Korea and Brazil as largest importers. However, also significant amounts of nitrogen fertiliser are traded, notably urea. Renewable ammonia opens up the opportunity to tap into remote low-cost renewable energy potentials. Renewable ammonia plants in GCC (Gulf Cooperation Council) are already aiming for the India market. Also, significant renewable ammonia developments are taking place in Australia, aiming for the export market.

Globally, ships use around 300 Mt of bunkering fuel today. Given ammonia has around half the energy density, a potential 550 Mt ammonia fuel market exists. Ammonia takes on a liquid form at -33C, so it does not have to be stored in high-pressure or cryogenic tanks. Ammonia is difficult to burn, so specialised internal combustion engines are currently being developed, which are expected to come to market in 2024. Ammonia fuelled ships are currently being demonstrated. Notably LNG ships are being built with ammonia retrofit option.

The Green Fuel Alliance, including partners from UAE, Egypt and France, is planning to produce 350,000 t/y per year of green ammonia to fuel maritime traffic at the Suez Canal.

Ammonia can also be used as fuel in power plants. Japan aims to import 3 Mt ammonia fuel by 2030, growing to 30 Mt by 2050. Also, power producers elsewhere have expressed interest in this option. However, ammonia fuel costs 20 USD/GJ whereas coal costs 2-5 USD/GJ. Direct renewable electricity generation from solar and wind is much cheaper and more efficient. But the ability to import ammonia and the capacity to store ammonia seasonally yield a viable pathway.

Ammonia also seems the best option for intercontinental hydrogen shipping. IRENA model analysis suggests around 15% of all clean ammonia will be shipped this way, which would equal around 100 Mt ammonia. Of this traded ammonia 80% will be directly consumed and 20% will be reconverted to hydrogen. This reconversion has required additional energy. Energy efficient ammonia conversion to hydrogen is currently under development. Commercial technology could be built at large scale today, if there is demand to do so.

The European Commission plans foresee 20 million tonnes of green hydrogen production and imports by 2030, the equivalent of 85 BCM natural gas. If half of the green hydrogen for Europe would come from imports (10 Mt of green h2) in the form of ammonia, that would be around 50 Mt of green ammonia import, which is a quarter of today’s global ammonia demand.

By 2050, in the IRENA 1.5°C scenario, the transition would lead to a 688 million tonne (Mt) ammonia market, nearly four times larger than today’s market. Growth will be driven by new energy demands. “Green ammonia” would dominate in the IRENA scenario. 566 million tons of new renewable ammonia production must come onstream over the next three decades. The production of this ammonia would constitute nearly a fifth of the global green hydrogen market.

The need for standards and certification

Ammonia is a carbon-free fuel, but today’s production is a major source of CO2 emissions. If ammonia is traded globally the clean or renewable character of the supply chain is not a given. The European carbon border adjustment mechanism is set up to treat EU and foreign products equally in terms of CO2 pricing. How the renewable character of electricity supply for hydrogen production is ascertained is critical. For fossil ammonia with carbon mitigation, the accounting for captured CO2 is critical. For example, use of captured CO2 for enhanced oil recovery, for urea production or for methanol production is not CO2-free. AEA is engaged in developing a certification scheme for ammonia, with a focus on global harmonisation to support international trade.

Dolf Gielen is the Director of the Innovation and Technology Center in Bonn, IRENA

Francisco Boshell is an Analyst at IRENA 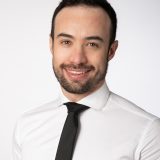