The Indian government is looking for effective ways to increase the use of solar powered pumps for small farm irrigation. About 70% of India’s rural households still depend primarily on agriculture for their livelihood, and successful farming usually requires irrigation. Currently, 21m pumps are connected to a primarily fossil fuel grid and 8.8m are diesel while solar has risen to just 130,000, mostly added in the last 5 years. Lelin Thouthang and Rohin Kumar review progress by visiting three villages trialing solar in the Indian state of Bihar and reference the Greenpeace India report “Solarisation of Agriculture”, published this month. Financing, local collective management, and the mis-match of sunshine with local irrigation timings are some of the big challenges. But success could be critical to India’s transition. According to IEEFA, India can achieve 38% of its renewable electricity-generation target just by shifting from conventional pumps to solar.

Vaishali, a small district of the Indian state of Bihar is an archaeological site. It has been known across the globe for its relation with Gautam Buddha, who is believed to have preached his last sermon before his death in 483 BCE. Today the same Vaishali is showing the way and enlightening the country about smart energy techniques through its solar irrigation models.

The region has a small amount of irrigation through canals and the remaining is through diesel and electricity operated tube wells. Where neither is possible, farmers solely depend on rainwater for cultivation.  Farmers claim that the ground water level has decreased by 10 ft (3 metres) and that several ponds and other water sources have dried up.

The prominence of diesel pumps in the region have ensured that a large number of farmers cultivate two to three crops in a year. In the post monsoon Kharif season (July-October), paddy and maize are cropped and in the winter rabi season (October-March), wheat, mustard, potatoes, vegetables, and pulses are cropped. Between these two main seasons, from March to June, summer crops which primarily include moong and vegetables are cultivated. A few wealthier farmers also cultivate tobacco.

In 2012, the Government of Bihar launched the Bihar Saurkranti Sinchai Yojana (BSSY), a scheme for solar irrigation, to address the lack of adequate irrigation in the state. The scheme which aimed to target small and marginal farmers provided 2 kWp solar panels with small pumps. The Bihar Renewable Energy Development Agency (BREDA), the nodal agency for the BSSY, provides a 60% subsidy in addition to the 30% subsidy provided by Ministry of New and Renewable Energy (MNRE), taking the total subsidy to 90%. The pumps were however found to be too small to suitably irrigate land.

An IWMI-TATA policy document reported that “beneficiary farmers complained that due to small size, it takes them twice as long to irrigate a bigha (10 bighas = 1.6 hectares) compared to diesel or electric pumps; also increasing labour costs.”

While farmers can decide the size of the pump and whether it is AC or DC, they cannot decide on the company as BREDA allocates districts to companies. A policy report by IWMI-TATA pointed out that this arrangement can potentially ensure that regardless of performance companies are assured supply orders. Based on the information presented in the report, after sale service provided by the companies has been poor and against the claim that they resolve problems within 48 hours, it takes around 3 weeks. In certain examined cases, it even took three to five months. The report also mentioned that the price for solar pumps under BSKSY seemed inflated in comparison to price of pumps in states like Gujarat.

According to Vaishali Area Small Farmer’s Association (VASFA), the government scheme failed to create the impact that it intended. This was around the time when the Deutsche Gesellschaft für Internationale Zusammenarbeit (GIZ), a German development agency, had been experimenting with different delivery models in the eastern parts of India. GIZ piloted a service delivery model of pay-as-you-go in Vaishali. Envisioned as a community based model, it is based on sharing a solar pump within an irrigation water-sharing group of farmers. The GIZ pilot collaborated with VASFA to implement its pilot solar irrigation project in Vaishali.

In 2014-15, GIZ began to implement this service delivery model in Vaishali. GIZ contracted Claro Energy for the supply of pumps and maintenance services. Claro Energy provided VASFA with two 5 HP AC solar submersible pumps manufactured by Shakti Pumps along with solar panels with a capacity of 4.8 kW for each pump. While the entire cost was borne by GIZ, the ownership of the asset lies with VASFA, which is also in charge of implementation, technical support and operational issues. Apart from testing the community-based model, the project also aimed at reducing dependence on diesel pumps for irrigation in the area and to promote the site for technology demonstration to farmers of neighbouring districts.

In Lalpura village, the solar irrigation pump scheme has 40 beneficiary members. In Baniya village, the scheme has 23 beneficiaries. In both areas the tube well is installed at a depth of 200 feet (60 metres). The solar panels in Lalpura village are fixed due to lack of space while the panels in Baniya are rotatable to ideally track solar radiation. Haharo, a comparatively poorer village with large number of landless farmers, is the third one to have solar irrigation pumps.

Unlike the solar irrigation pump projects in Lalpura and Baniya, where the entire cost was borne by GIZ with the assets owned by VASFA, in Haharo the five member Joint Liability Group (JLG) not only owns the pump but also has to repay a sizeable loan amount under the government’s Bhoomi Heen Kisan financing scheme.

The groundwater level in the region has been impacted on account of poor rains and any amount of water pumped into the pond sinks into the ground, keeping the pond barely shallow with water. As a result, the group has been finding it difficult to repay loan instalments.

In Lalpura cultivating a considerable amount of vegetables requires irrigation in the early morning and the evening. Also, most farmers prefer to complete work by noon owing to the scorching heat in the afternoons. Additionally, between November and February, the solar irrigation pump cannot be depended upon owing to insufficient solar radiation.

According to Nilanjan Ghose of GIZ, “During peak season between October and May when the water requirement is highest, the 5 HP solar pump does not meet the water requirements. Therefore, farmers continue to use electric and diesel pumps in addition to solar. However, data analysis for Lalpura village by GIZ has shown that about 50% of the village’s irrigational needs are met by the solar irrigation pump.”

Highlighting upon the solar irrigation models, the solar pump is meant to be shared between a fixed number of beneficiaries along with renting out services to other farmers. The management of the pump is overseen by a member nominated as the leader. All operational and financial decisions are made by the group members. While this community engagement is a step in the right direction, the pilot initiative with the three pumps has shown that group management can be riddled with issues ranging from inefficiency to corruption.

But given these challenges, Mr UK Sharma, a farmer and office bearer of VASFA says, “It is one time investment and around 20 to 30 farmers can be benefitted through one pump.” He further added that the experience of solar irrigation models in the three villages have been excellent and he appeals to the government to bring this into consideration.

According to an August 2018 report by the Institute for Energy Economics and Financial Analysis (IEEFA), “the government of India could achieve 38% of its renewable electricity-generation target just by shifting from conventional pumps to solar irrigation pumps.” Deployment rates of solar irrigation pumps are however still low. Of the total 29.93 million agricultural pumps, 0.13m are solar powered, 8.8m are diesel powered and 21m operate on grid connected electricity. To make real progress, the transition from conventional to solar-based pumps is dependent on the successful implementation of the central and state policies and schemes that promote solar irrigation.

Lelin Thouthang is an independent correspondent based in India and works and writes on agriculture, energy and climate change.

Rohin Kumar is communications campaigner with Greenpeace India and also writes on agriculture and climate change. 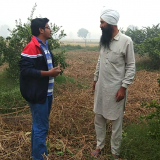 India based communications for Climate, Enegy and Environment.